For our first photography blog in 2017, we look back 100 years through images in our General Photograph Collection. The photos give us an idea of how Texans lived in 1917. With horses and buggies visible on the streets and farms, it shows that the modern era had not completely arrived. Yet significant changes in the lives of many Texans would come that year with the United States entry into World War I on April 6th. Young men who had never ventured out from Texas would go far away to the battlefields in France. 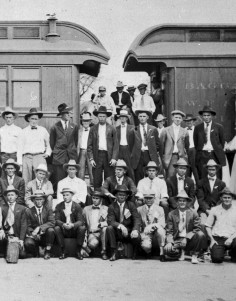 Washing buggies in the San Antonio River near the Navarro Street Bridge in downtown San Antonio. Photograph by Ellen Schulz Quillin. (074-0142. Courtesy of…