My Journey Through the Best Presidential Biographies 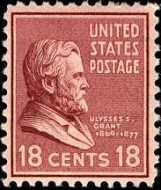 Despite the pivotal role he played in the Civil War and the importance of his administration to Reconstruction, I don’t recall spending any meaningful time studying Ulysses S. Grant in school.

My only brush with his presidency involved memorizing his name as one of the then-forty presidents during a high school trip to the Texas State History Fair. During that drive to Austin we had to do something.…so those of us on the trip decided to learn the presidents’ names in order. Sad, really.

When I finished reading a dozen biographies of Lincoln a couple months ago I assumed I would be in for a slow spell until my encounter with Teddy Roosevelt sometime early in 2015. Fortunately, Grant and his biographers proved me very wrong!

Ulysses Grant’s life story is astonishingly fascinating. There are certainly stretches of his life which proved dull and uneventful – and sometimes spectacularly unsuccessful. But…

One thought on “The Best Biographies of Ulysses S. Grant”