This week: The best pieces on Cuba, the United States, the Castros, and what the future holds. 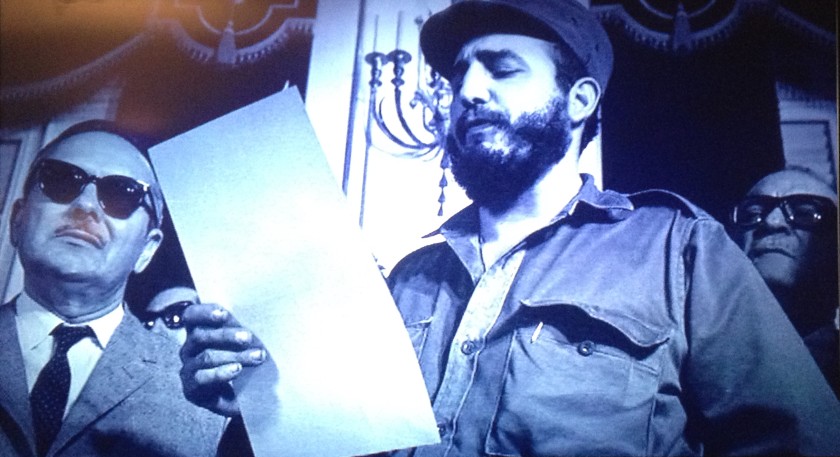 This week: The best pieces on Cuba, the United States, the Castros, and what the future holds.

1. No word yet from Fidel amid historic US-Cuba shift
By Anne-Marie Garcia | Associated Press | Dec. 19
“Everyone in Cuba is talking about the startling turn in relations with the United States, with one notable exception: Fidel Castro.”

2. Without Washington as its enemy, what will define Cuba?
By Tom Gjeten | The Washington Post | Dec. 19
“Both governments are gambling that this new world will suit their respective political interests. In this negotiation, however, there is no win-win: One government or the other is likely to lose.”

3. Cuba’s cash boon for GOP
By Kenneth P. Vogel and Tarini Parti | Politico | Dec. 19
“[W]hile polls show that most Americans favor normalization, wealthy donors for whom the issue is a top priority overwhelmingly oppose engaging with the Castro regime. …”

4. Why Congress Hates Your Cuban Rum
By Tim Mack | The Daily Beast | Dec. 19
“Havana Club or ‘American’ Havana Club? How untangling decades of Washington’s embargo politics could start a rum war among the world’s most powerful alcohol companies.”

5. The Revolution Fidel Castro Began Evolves Under His Brother
By Damien Cave | The New York Times | Dec. 18
“At a moment described by many as an equivalent to the collapse of the Berlin Wall, the absence of Fidel Castro … spoke volumes. For many Cubans, it confirmed that Fidel, perhaps by his own design, is slipping further into the past, into history, at a time when his approach to the United States seems to be fading as well.”

6. A Historical Perspective on the Cuba-U.S. Relationship
By Jason Steinhauer | Insights :: The Library of Congress | Dec. 19
“Let’s start with this: soon after Fidel Castro’s rise to power, the U.S. viewed Cuba as a security threat. What was the basis for that viewpoint?”

7. Detente Scrambles Political Calculus in Latin America
By Reed Johnson, Ezequiel Minaya, and Kejal Vyas | The Wall Street Journal | Dec. 18
“The Detente Between the U.S. and Cuba Has the Potential to Redraw Political and Economic Alliances Across the Hemisphere”

8. Cha-Cha-Cha: Obama’s On a Roll
By John Cassidy | The New Yorker | Dec. 19
“If you doubted that President Obama’s decision to normalize relations with Cuba was a political and strategic masterstroke, you only have to look at the reaction it has engendered to see otherwise.”

9. A Cuban who sold his beachfront home says he might regret that move
By Marco Werman | The World :: PRI | Dec. 19
“Yuro is part of the generation of Cubans known as the ‘lost generation.’ The ones who came of age after the fall of the Soviet Union — and the loss of all those Russian oil for sugar subsidies.”

10. The US Breaks Ties with Cuba
Witness :: BBC | Dec. 18
“It was in January 1961 that the USA first broke off diplomatic relations with Cuba. Wayne Smith was one of the last diplomats to leave the US embassy in Havana.”

11. Cuba: A Reading List
By John Williams | ArtsBeat :: The New York Times | Dec. 18
“[W]e asked editors at The Times to suggest books that offer the best looks at Cuba’s history and its relationship to the United States. Here are a few of their recommendations:”

12. Americans, here’s what you’ve been missing in Cuba all this time
GlobalPost | Dec. 19
“A new era in US-Cuba relations could see a travel ban lifted. Here are some of the sights US citizens could be visiting soon.”

13. U.S.–Cuba Agreement: Diplomacy At Its Best
By. John Parisella | Americas Quarterly | Dec. 18
“Just as Nixon went to China and Truman set up the Marshall Plan for Europe in the post-World War II era, Obama knew that he had to do something different with a nation just 90 miles off the U.S. shore.”

14. Pope Francis bridged gap between U.S. and Cuba during secret talks
By Paul Richter and Tom Kington | The Los Angeles Times | Dec. 18
“The pope’s secret role in the back-channel talks was crucial because, as a religious leader with the confidence of both sides, he was able to convince the Obama and Castro administrations that the other side would live up to the deal. …”

15. Topic: Cuba
By Ted Piccone and Richard Feinberg | The Brookings Institution | Dec. 2014
“See what they and other Brookings experts have to say about the measures and their impact on the two countries moving forward.”

16. Baseball in Cuba: A looming brain drain
By D.R. | The Economist | Dec. 18
“Cuban veterans represent the last remaining loophole in MLB’s regulation of players’ entry to the league, which helps to maintain competitive balance between rich and poor clubs.”

17. Opening Cuba and Closing Gitmo?
By James Stavridis | Foreign Policy | Dec. 19
“Havana will be pushing hard to shut the naval station at Guantanamo Bay — but Washington shouldn’t give in.”

18. Cuba’s Christmas Surprise for Caracas
By Daniel Lansberg-Rodriguez | Foreign Policy | Dec. 18
“Despite Maduro’s self-serving rhetoric, future U.S. tourism dollars, increased remittances, and access to foreign markets could easily replace the resale value of Venezuelan oil. Cuba’s wily leaders have made it clear that they’re more willing to offend Maduro than to risk being left standing when the salsa stops.”

20. As Obama opens to Cuba, China experts remember benefits from U.S. engagement
By Simon Denyer | The Washington Post | Dec. 19
“China has become a partner with the United States in some ways but also a powerful rival, geo-strategically and economically. Its leadership remains deeply suspicious of Western values, even as it pursues a deeper relationship with the United States.”